The Girl with the Dragon Tattoo

Tonight I saw The Girl with the Dragon Tattoo, starring Rooney Mara and Daniel Craig.

It would be impossible not to compare this film to its Swedish predecessor or to the book where the story originated, so I won't pretend I'm trying not to; that said, I'll do my best to focus less on the differences and more on the core quality of the film.

Mikael Blomkvist (Craig) is a Swedish journalist being brought down in the court of public opinion for a story he wrote that turned out to be less than factual. He was most likely set up by the subject of the story, but that is beside the point now that his and his magazine's reputations are ruined. To remove himself from the public eye, he takes a job with a wealthy family to investigate a murder that happened several decades ago.

Lisbeth Salander (Mara) is the damaged, disturbed, unconventional investigator brought in to act as Blomkvist's research assistant. Because of her past mental health issues, she is forced to report to a guardian who is responsible for dispensing her allowances. Unfortunately, her caring guardian becomes hospitalized and she is assigned to a sadistic, horrible guardian who demands sexual favors in return for her own money. She devises a way to prevent this from happening, but in the meantime is brutally raped by the man.

Christopher Plummer plays Henrik Vanger, the wealthy member of a troubled family with a nazi past, desperate to find his niece's killer. As usual, Plummer gives a superb, believable performance in the role, but unfortunately his screen time is too brief.

I think the same of Robin Wright, who makes a fantastic Erika Berger, Mikael's boss and married lover. She's pitch perfect in the scenes she appears in, but they are few and far between.

Overall, the story stays somewhat close to the novel, though a few ridiculous details make me groan with American shame (the McDonald's product placement is blatant; there is a somewhat predictable mention of Ikea). I also agree with other critics who have mentioned that Mara's version of Lisbeth is far too feminine.

Aside from making Lisbeth 'pretty' in certain intimate scenes, she also appears to register emotion with Mikael, which is something the true character never would have done. They aren't a couple, but here, they behave like one.

Daniel Craig is also too good looking and too physically fit to be playing the smoking, eating Mikael. And far to few cups of coffee were consumed to stay true to the native text.

However, Fincher does work his magic in many ways.

The lighting and the shadows and the mood of the film are always spot on. Whether Liseth is blazing down the street on her motorcycle or watching a night vision camera to see who is prowling about the property, the aura of the story is captured in a more spiritual way than that of the original film.

The more linear script by Steven Zaillian also manages to put the sequence of events in layman's terms for the intended American audience, which is probably a good thing for those who became too frustrated and abandoned the book, or are afraid of films with subtitles. The story deserves to be seen, even if digested in a more obvious way.

The violent scenes are no less horrific (especially a post-rape glimpse of Liseth in the shower); the chases no less tense.

All in all, a satisfying, if not yet as accurate retelling of a classic mystery that will certainly be shared for years to come.

When I think of Martin Scorsese, the first images that come to mind are those from brilliant-yet-violent Taxi Driver and Goodfellas. Never did I think I'd be attending a 'family film' (in 3D, no less) directed by this legend. But that's what I did today.

Hugo (Butterfield) is a young boy who loses his father in a fire and is taught how to run the Paris train station clock by his uncle. When his uncle disappears, he is left to fend for himself, stealing breakfast pastries to eat and tools to make sure the clock keeps working.

There is a nasty station inspector (played annoyingly by Sacha Baron Cohen) who is anxious to send Hugo (and any other unaccompanied children) to the orphanage; there's also a true friend found in Isabelle (Chloe Grace Moertz), a girl who is being raised by a nearby toy booth owner Georges (Kingsley) and his wife.

In this small cluster of characters, through a museum piece Hugo is working hard to fix (it was his dad's last pet project before his passing), we are taken back to the beginning of film and the importance of not letting go of our passions.

To explain how it happens would be to give too much away, but I will say that though I was never bored, I didn't quite see the need for 3D with this story. The heart of the screenplay was strong enough that the few 'wow' effects that were showcased were merely icing on an already yummy cake.

Hugo is sweet and sincere and great for the whole family, but save yourself the extra dollars and see it sans 3D. You'll surely love it all the same.

We Bought a Zoo

Yesterday I saw We Bought a Zoo, starring Matt Damon and Scarlett Johansson.

Benjamin (Damon) just wants to make life better for his family. He recently lost his beloved wife and his teenage son is suffering from a horrible depression. He quits his job and decides to move the family to the country—to a zoo—and begin a new chapter of life.

Crazy? Absolutely. But sincere and genuine too, which Damon conveys almost painfully well.

Soon Benjamin is fighting the crush he has on his zookeeper, Kelly (Johansson), and trying to scrape together enough money to re-open the zoo, all the while dealing with his angry son and his sweet little daughter, who seems to be the most balanced of the entire bunch.

The kids who play the children, Colin Ford and Maggie Elizabeth Jones, are wonderful. Sure, they're cute, but they're in no, way, shape or form annoying (which often happens in these family flicks).

And did I mention this is a family flick that was directed by Seattle stud Cameron Crowe?

Were it not for the cool music that accompanied key scenes of the film, I dare say I would not have recognized his style at all. This film is a far cry from Almost Famous, but maintains the same heart and honesty that's at the core of his best films.

Is it predictable? Sure. Does it stray from the real-life story maybe a little too much? I'd say so.

But that doesn't mean it's not a satisfying, sweet departure from some of the heavier films out this season.

Mavis Gary (Theron) got out of the small town she was raised in, moved to the big city, got married, became a young adult author and got divorced. Convinced she can find happiness with her high school sweetheart, she returns to said small town to break up his marriage and re-claim him as her own.

When she arrives in Mercury, Minn., the first person she sees is Matt (Oswalt), a former classmate who was permanently injured in an attack he endured during high school. True to stereotypical form, Mavis is not exactly kind to Matt, just as she wasn't when they were kids, but soon realizes he makes a good confidant (and drinking buddy). He entertains her perhaps because he enjoys the attention, or the puzzle of trying to figure her out.

Her pursuit of Buddy Slade (Patrick Wilson) is desperate, sad, devious and unfortunately completely believable. We all know women like this; we all know how it feels to suffer for the one who got away.

While the film's subject matter could be depressing for a variety of reasons, the sharp writing of Diablo Cody, thankfully dialed down from the cuteness of Juno, makes it sarcastic and funny, rather than tragic.

Now, that's not to say the audience isn't given an opportunity to cry near the end (I'll admit I did), but when the emotion arrives we've all earned it because we genuinely care about all of these people.

Theron is wonderful as this multi-dimensional mess; Oswalt delivers his best dramatic performance as the wounded soul who doesn't waste his time being bitter. They're one of the most real pairs, with the most real chemistry, to hit the big screen in a long time.

Reitman does right by his viewers, nailing the authenticity of a small town without making its residents stupid or simple. The Memorex yellow and pink cassettes that Mavis rocks out to are also a nice touch (every musical thirtysomething girl will remember those from childhood).

The only place this film fails is in the marketing—before seeing it, I assumed it would be a romantic comedy-catch-phrasey romp. Instead, I was pleasantly surprised with a dramedy full of heart.

One of the most powerful set of documentaries I've ever watched are Paradise Lost: The Child Murders at Robin Hills and Paradise Lost 2: Revelations, about the unfair murder convictions of three teenagers, which the media dubbed the "West Memphis 3."

Earlier this year, the convictions were overturned and the three boys (now men in their 30s) walked free. The filmmakers who told the first two parts of the story continued filming and have completed the conclusion to this real-life trilogy, Paradise Lost 3: Purgatory.

Posted by Tassoula at 8:16 PM No comments: 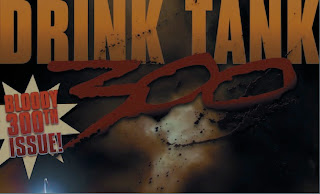 Yep, the Hugo-award winning Ezine recently published volume 300 and I wrote a piece for it in the 'My Favorite Movie Theatre' section.

You can check it out here.

I couldn't be more honored that I was asked to participate!
Posted by Tassoula at 8:16 PM 1 comment:

Matt (Clooney) is a distant dad, married to his work. He has a tough time relating to his daughters, and an even tougher time relating to his wife in the midst of a huge property sale. The land in question has been in his family for several generations and he is tasked with acting as the trustee of that land on behalf of several cousins.

When his wife Elizabeth (Patricia Hastie) ends up in a coma following a boating accident, Matt's life is turned upside down. Aside from his grief, his youngest daughter, Scottie (Amara Miller), is spiraling out of control, while his eldest daughter, Alexandra, may have a drug (or at least drinking) problem. He does the best he can under the circumstances.

Alexandra soon reveals a family secret that devastates Matt further. This leads to a witch hunt field trip and further distress for all involved.

Oh, and all of this happens in beautiful, paradise-like Hawaii (which they do a very good job of normalizing in this context).

Doesn't sound like fun? Well, no—but the characters are so well-written, and the actors are so great in their roles that it is actually a very pleasurable film to watch. Satisfying if not happy; but witty all the same.

A small but key role is nailed by the oozing-with-charisma Matthew Lillard, who is perfectly cast as an ambitious realtor. Also charming is the fantastic Judy Greer, who plays his wife.

Clooney will certainly be leading the Oscar race for his understated, powerful work in the film, and I for one won't be sorry if he prevails.

Though it may be a tough story to see (especially if you've had to decide whether or not to leave a loved one on life support) it is a genius exploration of family dynamics as they often play out in real life: complicated, loving, painful and revealing all at once.