Baby (Elgort) isn't your average getaway car driver. He's young. He's distracted (by music of his own choosing). He's got a seemingly endless supply of sunglasses.

He's not meant for a life of crime.

This story, really mostly about him, is a ride in itself—a genre-bending, hilarious, tragic, sentimental, endearing, tense thriller that doesn't give you much of a chance to breathe between scenes.

Baby's boss, Doc (Kevin Spacey), promises him he can leave the life once he's settled a debt that's unbeknownst to us. He achieves this in a heart-thumping heist scene and calmly returns home, where he cares for Joseph (CJ Jones), an elderly deaf man, in a run-down apartment. He also gets friendly with waitress Debora, who works at a nearby diner.

All along, Baby has a continuous soundtrack playing in his ears. The excuse given is tinnitus, but his knack for making music from his secretly taped conversations leads us to believe there could be more to it.

He gets to know many of the criminals he drives for along the way. Smoldering Buddy (Hamm), evil Bats (Jamie Foxx) and others. They are suspect of his youth and his earbuds and his incredible skill at operating motor vehicles.

There are too many twists and turns to properly take the story any further without spoiling, so I'll leave it there and simply say: Edgar Wright has outdone himself.

I'm a fan of his other work (Shaun of the Dead probably the most recognizable), but this is better. It's smarter. Sharper. Faster.

Above all else, it has rhythm. Since the storytelling is woven through music that our protagonist selects for his various moods and jobs, the film radiates with a series of songs that wouldn't feel out of place in the world of Tarantino. And yes, there's violence. And some language too.

But it remarkably doesn't feel gratuitous, and the Georgia accent on our hero makes him all that more appealing. There's even a love story for the romantics to fall for.

I may have to see it again. 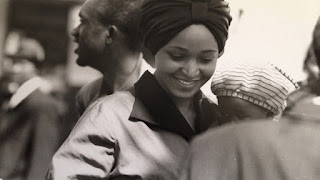 Though I'd seen countless documentaries and films about her former husband Nelson, I'd never seen a film dedicated to Winnie's story alone, so it's good I began with this one.


It was a solid film, though difficult to watch in many places because of the archival footage. I especially appreciated the candid insight from Mandela herself and her daughter.

Diana Prince (Gadot) lives on the all-female island of Themyscira with her fellow Amazons, but she's the youngest. Youngest of them all when her aunt (Robin Wright) begins secretly training her for combat.

You see, these ladies are no fragile flowers—they're fully capable of defending themselves (plus anyone they deem worthy of defending) and Diana is special. They know they need to prepare her for greater obstacles someday.

The film gets us to "someday" rather quickly. Blue-eyed spy Steve Trevor (Pine) crashes his plane into the ocean that surrounds their land and Diana pulls him to safety. He is soon followed by angry Germans (this is WWI, after all) and it's on.

Diana accompanies him back to England, and from there on out, they're a team. He is working to stop the development of chemical warfare that will alter the rules of engagement; she is out to stop war(s) altogether. They make quite a pair.

Of course, there's romance. And I won't go as far to say that the two have a "crackling chemistry" or make you believe they are two halves of a full heart, but they do complement each other nicely (note: the one snarky line about marriage got a huge round of applause in my theater). I was fine when the two were together and I was fine when they were apart. I was grateful they didn't make the whole plot center around their attraction. In fact, the fight scenes rival that of any great action flick and that's more what I came away remembering.

But let's talk about Gal Gadot. Set aside for a moment that she's naturally gorgeous and flies around the screen with acrobatic grace, kicking the ass of anyone who gets in her way.

What do I love most about her performance? The warmth and intelligence she brings to our legendary superhero. This is no flake who bats her eyelashes, or waits for a man to protect her. This is a sweet, kind soul who just happens to fuel her intensity and power with love. Gadot comes to the role with just the right amount of innocence to be believable, yet she's strong enough to earn her superhero title. They really couldn't have cast a better actress to play her.

In fact, everyone here is well cast. The only character who really bothered me was Dr. Maru (Elena Anaya). She was a little over-the-top for my taste. So much, that I wouldn't have been surprised if she threw her head back and cackled or started petting a cat.

That said, the flaws are minor and the film is fantastic. It's hard to believe that this is the first major superhero movie to ever be directed by a woman, but Patty Jenkins was the right choice, hands down. The genius of it is that the focus really isn't on gender. It's just on this powerful being from a faraway place who happens to be female.

At heart, Wonder Woman just proves what we already know to be true: that love is the greatest force of all.