Today I saw the documentary Sicko, by Michael Moore.

It is the topic of Cinebanter 34, which is available here.

Posted by Tassoula at 1:19 PM No comments:

It's Kafka-esque kookiness with a bit of sadness...and a bit of humor thrown in.

The film focuses on author Michael Enslin (Cusack), who travels to 'haunted' hotels and reports on their paranormal (or just normal) activity. We soon learn he is a skeptic who recently left his wife after their only daughter died at a young age. His vices apparently include drinking and surfing. He is sarcastic and jaded and every other stereotype that writers are supposed to be.

After he receives an anonymous postcard to visit the Dolphin Hotel in New York City, he takes the bait and attempts to book the room referenced on the card. When he's unable to do this on his own, he gets his literary agent and lawyer involved and they force the issue. When he arrives at the hotel, a typically-charismatic Samuel L. Jackson (playing the manager) pleads with him to stay away from the room.

Now Samuel is wonderful, but the I-could-open-a-can-of-whoop-ass-on-you-in-an-instant rhythm of his speech is such a distraction, it's hard to take him seriously. And along the same lines, although Cusack is supposed to be a messed up, faithless woman deserter, he still somehow manages to be likable—even attractive at times.

At the heart of the movie is a man who is lost in grief and subconsciously hoping to find proof of something else in the universe.

It will be the topic of Cinebanter 33, so tune in on July 3 for our review.

Posted by Tassoula at 8:29 AM No comments:

Last night I screened Sex and Death 101, starring Simon Baker (pictured below signing autographs after the premiere) and Winona Ryder. 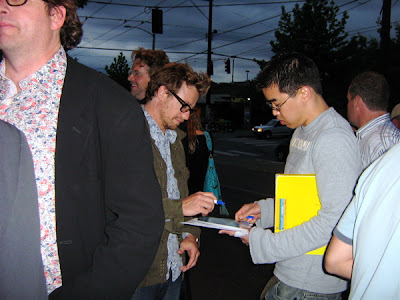 Stay tuned to Cinebanter for my upcoming review.
Posted by Tassoula at 11:30 AM No comments:

Listen to my interview with Director Dan Gildark, Screenwriter Grant Cogswell and Lead Actor Jason Cottle on Cinebanter 32, which is available here.

Posted by Tassoula at 9:29 PM No comments:

It is the topic of Cinebanter #32, which is available here.
Posted by Tassoula at 10:05 PM No comments:

The story begins with the main character, Ann (Danes/Vanessa Redgrave) traveling to her friend Lila's wedding at a posh family home on the east coast. We immediately sense that Lila is preparing to marry the wrong man and see the immediate connection between Ann and Lila's brother Buddy (Hugh Dancy).

As the story unfolds, the subject of class prevails—preventing Lila from marrying the boy she has passion for, Harris (Patrick Wilson). Turns out that Ann has passion for him too and Harris returns that passion on Lila's wedding night as twists and turns are turning a happy day into a tragic one.

This is all told through flashbacks that the elderly Ann is remembering on her death bed, as her daughters (Collette and Natasha Richardson) face similar challenges in present day.

Without adding spoilers, the moral of the story is: marry the person you have the magic with.

Not the guy your friends think is perfect for you or the girl your family happens to adore.

Spend the rest of your life with the person who brings joy to your days and passion to your nights.

Then you won't regret it on your deathbed and make the rest of us cry.

Posted by Tassoula at 5:40 PM No comments:

Stay tuned to Cinebanter for my full review.
Posted by Tassoula at 9:42 PM No comments:

This morning I screened the film Interview, starring Steve Buscemi and Sienna Miller.

Stay tuned to Cinebanter for my upcoming review.
Posted by Tassoula at 6:39 PM No comments:

Listen to Cinebanter #31: WAITRESS for my capsule review.
Posted by Tassoula at 11:19 PM No comments:

This is one of those films that will probably linger in my head for a while, but I'm not completely sure why.

The story tells of an already dysfunctional marriage between Claire (Linney) and Stewart (Byrne) that is disrupted further by a discovery Stewart and his friends make on a fishing trip. They find the body of a murdered woman and don't report it until the end of their stay at the river. This brings shame from the townspeople and anger from their partners as the crime gets investigated.

As the tale is based on a short story by Raymond Carver, I can see why they left many things a mystery, but I'm not sure it worked in this context.

What we do know is that Claire is Stewart's second wife, she left her husband once, her mother-in-law is a meddling nightmare, and their best friends apparently lost their adult daughter. We also know who the killer is and how he preyed upon his victim.

What we don't know is why Claire left Stewart (though all signs point to post-partum depression), how exactly their friend's daughter passed, why the killer kills and why the Irish Stewart and the American Claire are living in Australia in the first place.

As the film progresses, you think you may get the answers to some of these questions, but you don't. I guess that's the biggest problem I had with this film—too many stones left unturned.

But to call it boring wouldn't be fair.

The performances are good, the pace is fine and the subject matter is interesting, if not exciting.

Posted by Tassoula at 3:42 PM No comments:

Visit this Cinebanter page for my capsule review. 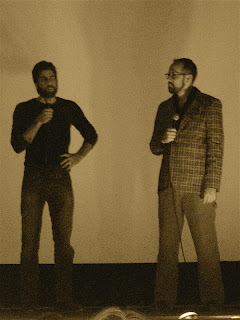 Posted by Tassoula at 9:42 AM No comments:

If I was forced to describe this film in one word it would be "chemistry."

The musical follows a guy and a girl (seriously—we're not sure of their names) as they meet on a Dublin street and fall in love...over music.

The guy is a street musician/vaccuum repair man who catches the eye of the girl who is a maid/flower salesperson, originally from the Czech Republic. There is an immediate spark between the two, and at first it seems as if the girl is chasing the boy.

Soon enough we learn the girl is married with a daughter and an estranged husband. This puts a damper on things, as the tables have quickly turned and the guy is the one doing the chasing.

Regardless, the two end up making beautiful music together—joining forces to create an actual CD with a handful of other musicians, and dancing around the topic that is their connection.

The movie is frustrating, as you're never quite sure the girl wants their love to be realized the way you and the guy character crave for it to be, but it's a beautiful journey nonetheless.

The original music, their undeniable chemistry and an especially gorgeous scene with a piano in the dark makes for a pretty romantic piece of art.